Another game that is excellent and is also new, is Volume, designed by Mike Bithell. The game relies heavily on “pattern recognition” to score points. Now this skill is very useful, in a lot of fields, right from forensics of cyber security to stock market trading (e.g. technical chart analysis, which IMHO is nothing but recognizing different patterns and acting on them to predict market movements). Most people make good use of their pattern recognition skills to make a ton of money or a rewarding career. Volume requires this kind of skill as well as a sense of geography, to win.

The game itself is set in England several decades ago. One Guy Gisborne has managed to corrupt the country’s political systems to create a rapacious and malevolent corporatocracy. Robert Locksley is a hacker and activist who breaks into the simulated nerve-centers of Gisborne’s power apparatus to steal incriminating data, which is then shared with the downtrodden people. The whole exercise is transmitted via some futuristic video channel and hence the camera angles and view from top that is shown.

The game itself is a series of about 100 or so Isometric (in laymans language, 3 –D) maps of different places, with the view from an angle at the top, as if you are watching a CCTV camera. The map has a series of obstacles, structures and guards. The hero is actually a thief, who has to dodge the obstacles, guards and booby traps to win the booty. The Hero gets nice gadgets to escape and trap the guards, such as lures, decoys and even an invisibility cloak! 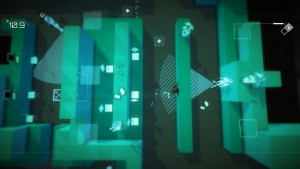 Another theme that comes through is a kind of Robin Hood type setting, where he “robs the rich” and “rewards the poor”. In this game the rich are the corporatocracries, who have captured money and power by corrupting the political system.

There are plenty of text notes that help in giving a contextual feel while playing.

Several educational benefits are available. One is the usual skill of collecting information, trying to gauge the adversaries skills and assets, manipulating adversaries to have advantages over them, decision making when confronted and so on. Also it also has a well themed economic lesson that is hard to miss.

The same technique that is used in such games is also used in serious games that are used to teach concepts of process safety, such as HAZOP.

All in all, an excellent addition to your PC collection!