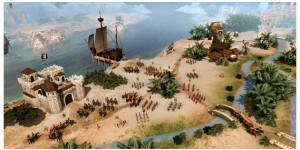 This all time favorite game, based on the popular HBO television series of the same name, which again based on a novel named A Song Of Ice and Fire by the creative genius George R R Martin (and who apparently also collaborated on developing it), has a PC version that is justifiably popular. This version was released way back but it remains popular even today with several versions. A new browser based version is expected soon.

The PC version was developed by Cyanide James Cosmo and Conleth Hill are shown in their same roles from the original TV series as Lord Commander Jeor Mormont and Lord Varys, respectively. Surprisingly, even George R. R. Martin himself, has a cameo appearance as Maester Martin in Castlewood. The game also uses the same music from the TV series.

Our appeal for the game is not just due to the superb graphics and multiple gaming possibilities that it offers, nor the detailed landscapes and realistic mockups that are part of it, but all to do with the serious games aspect of it i.e. Can it be used for learning? In one word, Yes. In more detailed terms, these are some of the learning aspects that we found

Other minor advantages include information retention about people, their characters and interpersonal relationships, elements of cost-benefit analysis and so on. All in all, an excellent way to learn and master strategies.